With a severe weather system moving into the area for tonight’s second round playoff games, we thought it would be a good idea to remind everyone of the GHSA policy on interrupted and terminated games.

If there are any issues, be sure to contact your assignor immediately and be sure to keep your blocks up to date as games are likely to be rescheduled.

The GHSA requires the host school to provide lightning detectors at all outdoor athletic activities. The Referee must identify the site administrator during the pre-game. When a lightning detector indicates a dangerous situation, the game manager will notify the head official. At that point, the official will suspend play and all participants and fans will go to a place of safety. Play may resume if the lightning detector gives the all clear.

If a lightning detector is not available for whatever reason, officials should suspend when lightning is spotted and move to a designated safe place. The NFHS Lightning Policy defines a safe space as a”substantial building with plumbing and wiring where people live or work (e.g. a school, gym, or office). Play should not resume for at least 30 minutes; the 30 minutes resets each time thunder is heard or lightning is seen. 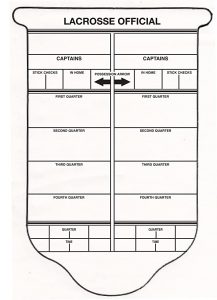 All Lacrosse playoff games must be played to completion. There is no mandatory two-hour delay and the 11:30 curfew is waived. Administrators from the competing schools may agree to postpone the contest and resume competition at the point of interruption at a later time. For Monday and Tuesday games, Wednesday is the day games would be played.  That being said, the team that is behind may choose not to resume the contest.

Officials should make note of the time the game was suspended, the score, the number of timeouts each team has remaining, Alternate Possession, which team is in possession, if any, and the position of the ball when play is resumed.