Withholding is a misunderstood concept in lacrosse.  It usually occurs when the ball stuck in either the stick or equipment or when a player, intentionally or unintentionally, withholds e.g, lays flat on the ball, thumbs the ball, etc..  Note that withholding can occur when the ball is loose or in possession. The major issue is that a player may not, intentionally or not, prevent other players from the playing the ball.  This post will help you identify what to watch for in each situation and how to handle them.

Whenever an official judges that a player is withholding the ball from play, there is AN IMMEDIATE WHISTLE!  There is no “one pop” or four seconds to get the ball out. That being said, if it’s not stuck, if it’s not stuck. Nor is this a play on situation.  You have determined that the loose ball, is being withheld and therefore the player is denying an opportunity for the offended team to gain possession.  That being said, an official should be 100% sure that the ball is, in fact, being withheld before turning the ball over.

As is often the case, there are a number of rules that address the issue of withholding. Rule 4:7 Art 1 addresses three situations when the ball is stuck in the crosse: ball stuck in the front, the back, and a ball in or under the head of the stick which is not player possession.

Stuck in Front of Crosse

The ball can become lodged in the bottom of the pocket, behind the ball stop or it may become caught in the sidewall.  If at any time the ball is stuck in the crosse it is an immediate whistle for withholding. A player may purposefully hold the ball in his crosse either with his thumb or by pressing the front of the head against his chest. See Rule 6:12 Situation C. This play  is difficult to see, but most often occurs as a player is driving to the goal through a swarm of defenders.  The on official needs to watch the action carefully S

Stuck in Back of Crosse 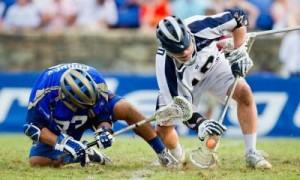 This situation mostly occurs during a face off with what is called a “pinch and pop” move.  The faceoff midfielder clamps down on the ball while pushing his crosse through his opponents crosse and coming up with the ball in the back of his crosse.  how can an official determine if he ball is stuck or not.  A player must demonstrate to you that the ball is being withheld. So, call possession and wait to see.

Here is a perfect example of what I am talking about.

If a player looses his stick and the ball either remains in the pocket or is trapped under the head of the crosse it is withholding.  Do not be too quick to blow the whistle in this situation, instead wait to make absolutely sure that the ball is actually in or under the stick.  See Rule 4:7 1 Situation.

If the ball is stuck in a player’s uniform or equipment, it is withholding and an immediate whistle, but in this case possession is awarded via the Alternate Possession rule.  The only exception is in the case of the ball lodged in the goalkeeper’s equipment while he is in the crease.  In that case, award the ball to the defense in the alley at GLE. See Rule 4:7 Art 2 and Note.

The faceoff or loose ball scrum is where you will see a player withhold a loose ball. The primary rule addressing loose ball withholding, Rule 6:12,  states:

When a loose ball is on the ground, a player may not lie on the ball, trap it with his crosse longer than is necessary for him to control the ball and pick it up with one continuous motion, or withhold the ball from play in any other manner. A player, players or team may not deliberately withhold the ball from play. Repeated actions of this nature may be ruled unsportsmanlike conduct.

Players will often clamp down on the ball and then draw the ball back into their stick.  The technique is called raking the ball.  A player may also elect to roll the ball out to a teammate.  As long as a he does either of these in one continuous motion, these are a legal plays.  The problem arises when a player clamps and then delays in order to gain an advantage.  The player may have difficulty making a play to secure or roll the ball due to a legal play by his opponent or he many be held.  Rule 4:3 Art. 5 and 6,  state that a player may not use his body or crosse to hold down an opponent or intentionally grab an opponents crosse with his hands or fingers.   So is a player delaying or being physically prevented from playing? It is a judgement call, but holding trumps withholding.  You can’t be expected to move if you are being pinned or held.

Withholding Around the Crease

Rule 6:12 Situation A and B set up a scenario in which there is a loose ball in the crease. The goalkeeper covers the ball with his crosse and in situation A immediately draws the ball back. In situation B make no apparent effort to draw back and pick it up. In A legal play and in B withholding. The reality of officiating the crease make this a little more complicated.

As with any play near the crease, there are two things you need to quickly determine as the Lead.

If the goalie is in the crease, he gets special protections.  If the ball is in the crease, no one may touch the crosse of the goalie.  Therefore in this situation, it is unlikely you will have withholding as the keeper is free to scoop the ball up without anyone interfering with him. There is no need to rush the call.  Give him a second to get his bearings and scoop up the ball.  However, if iyou believe the keeper is stalling to give his teammates a chance to set up the clear and delay the four second count, you should call withholding.

If the ball is loose and is outside of the crease and the goalie clamps the ball you have a different situation altogether. Keep in mind, the ball is loose.  So even though the ball is clamped, the Goalie is NOT in possession of the ball (defined in Rule 4:5 Art. 2 as carrying, cradling, passing or shooting). Players may legally check the part of the keeper’s stick outside of the cylinder. So the question to keep in mind is are the offensive players legally playing the keeper’s crosse preventing him from gaining possession, are they holding or pinning him, or is he withholding.  It is a judgement call.

As with anything, review the rules, talk to your partner, call veteran officials, and discuss with your trainers!