Here is what you need to know on how Ejections and Disqualifications are handled according to both NFHS rules and GHSA policies.  As we come to the end of the season, it is important to keep in mind that both ejections and DQs have implications for subsequent games and now that we are at the end of the season, these games potentially have playoff implications.  Here is some information on handling these situations. After a game with an ejection or disqualification it is best practice to review how you felt you and the crew performed. See if you can identify what you might have done differently. In both cases CALL YOU ASSIGNOR as soon as the game is over to let them know! 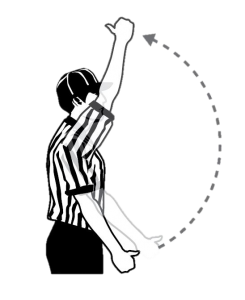 The rules covering ejections were changed this year in how we handle an ejection for a player or non-player and for coach.

5-12-1 PENALTY: Three-minute non-releasable penalty for a player, substitute or non-playing team member or a one-minute non-releasable penalty for a coach and ejection for the remainder of the game. The ejected coach shall be removed from the premises (bench and field area). The ejected player, substitute or non-playing team member shall be removed from the premises if there is authorized school personnel present to supervise the ejected student. If no authorized school personnel is available, the student shall be confined to the bench area. The sponsoring authority is responsible for notifying the appropriate school of the ejection.

Ejections are serious issues. Officials may eject someone even after the contest has ended (Rule 5:12:1 Situation A). Officials should be aware that there is a financial penalty for teams when a coach or player is ejected in addition to subsequent suspension.

The GHSA Executive Director has the authority to levy additional penalties for repeat offenders. Any student who intentionally injures or intentionally attempts to injure another student, coach, official, spectator, or other person immediately before, during, or immediately after any GHSA-sponsored activity, may be declared ineligible to participate in future GHSA activities by the GHSA Executive Director. NOTE: The notice, hearing, and appellate procedures set forth in the GHSA Constitution shall be applicable to such rulings (2.73)

It is possible that a player might accumulate multiple fouls during a game and the crew not realize the player should be disqualified.  Be sure to remind your scorekeeper to inform you if a player gets close or reaches five minutes of personal fouls.  Check the with table between quarters if you have a player who has a multiple minte foul.

Rule 5:11:1 Any player who accumulates 5 minutes in personal foul penalty time shall be disqualified from the game.

A Disqualification is NOT an ejection. There is no financial penalty from GHSA for a DQ, but the player must sit out the next scheduled contest according to the GHSA White Book (2.72.3)

The Referee is responsible for submitting an Incident Report (www.galaxref.com/contact/incident-report) within 12 hours.

Incident Reports from officials must be filed with the GHSA office ASAP for the following situations:

NOTE: It is not necessary to report sportsmanship violations that do not result in ejections.

Please be sure to call your assignor IMMEDIATELY after the game as they will likely be called, texted and emailed by parents, fans, coaches and ADs.  Be sure you give them a heads up and a rundown of what happened so that they can properly respond!

Contact your assignor as soon as the game is over and let him know that an Incident Report is coming. Coaches, players, fans and administrators will be emailing him, make sure you give him a heads up.

These should be factual narrative without editorial comments that thoroughly describes the actions involved.  Be sure to get the full names of any persons involved (ask the scorekeeper) Instead of writing Blue #15, write  John Doe, #15 for the Blue team.

These reports are sent to GHSA and passed along to the principal of the school involved along with a letter from the Executive Director of the GHSA. A copy is sent to the GLOA secretary who then distributes it to the entire board.  The referee also receives a confirmation email with a copy.

All game incident reports MUST be submitted electronically through the GHSA MIS System by the association secretary within 48 hours of the incident date.

The following is the policy for submitting game incident reports to the GHSA Office (Officiating Handbook 3):

If you are unsure as to whether or not you should submit a report, call your assignor!