We are tasked with keeping the game safe, fair and fun.   In order to achieve those three goals, you and your crew must trust each other to focus on their areas of responsibilities. It is imperative that each official (Lead, Single and Trail) know their responsibilities  and focus on their keys, on or off ball, at ALL times. One situation in particular is especially important to cover: watching the shooter or passer after he has taken a shot or released his pass. As the 2015 USL Mechanics Manual states, “If you miss these fouls, it leads to a high level of frustration among the coaches and players, which can lead to an out-of-control game.” (45)  Everyone, coaches, fans, players see these big hit but you can’t make the call if you didn’t see it. This mechanic should be emphasized in the pre-game at ALL levels. Whether you are a new official or an old vet, if you are keying on the shooter you should repeat to yourself “Watch the shooter. Watch the shooter.  Watch the shooter.” Remember, safety NEVER takes a holiday.

This post will address responsibilities for both two-man and three man mechanics.

It is imperative that both officials on a two-man crew work as a team; focus on your keys and let your partner take care of theirs. But the reality is, in a two-man game there is a lot you are going to miss; a player stepping offsides, jostling on the crease, perhaps even a contested play on the endline. There are only two of you and you need to prioritize responsibilities.  At the top of that list should be safety. The lead official has the goal and cannot watch the shooter.  The Trail official MUST concentrate on the shooter, even if the shooter is not in his area (i.e. he was the off ball official). While it is natural to follow the ball you must break yourself of this habit.  Yhe Trail official MUST keep his eye on the shooter/passer to watch for the late hit or illegal contact. You cannot hep the Lead on a goal or crease call because you are not in position to do so.  Keep your head on a swivel, be aware of which players are likely to take a shot and know how the defensive is sliding.  A good way to track you and your crew is after every shot, the Trail should know the number of the player who scored the goal while the Lead may not know. 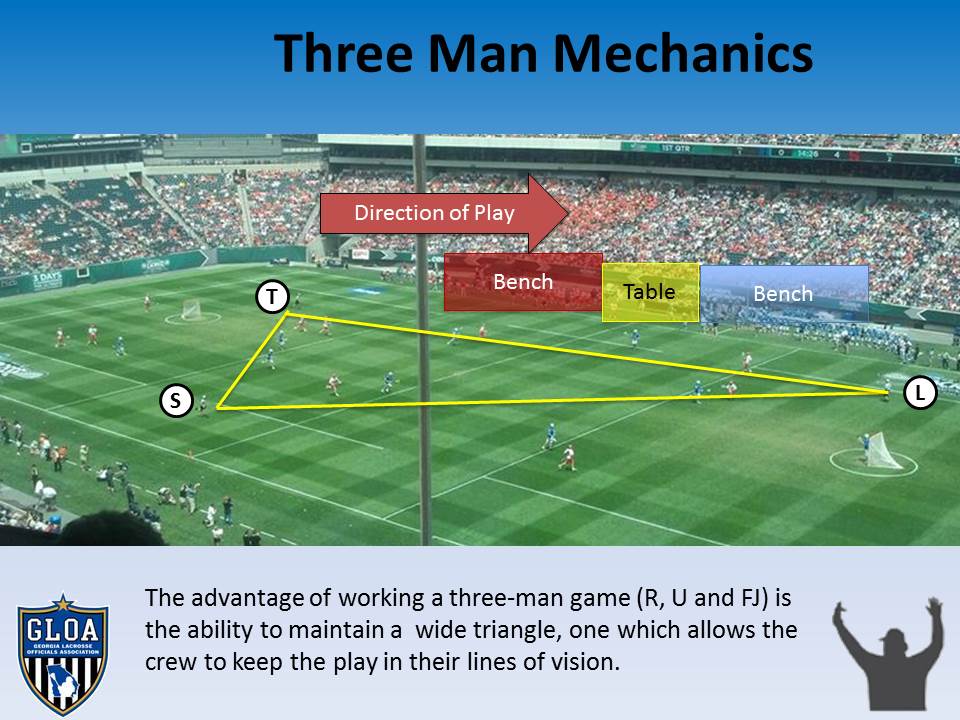 It is often said that the three-man game is a two-man game with help.  Three man mechanics offer officials an opportunity to really focus on the entire field at all times.  The Referee, Umpire and Field Judge should maintain a wide triangle, one which allows the crew to keep the play in their lines of vision. As with the two man game, it is key that each official focus on their area of responsibility. In a three-man game there will be overlap and so verbal communication is essential. In addition, keys can change quickly as the play develops.  Understanding your role and anticipating the play is imperative. A challenge many officials face is that the two-man mechanics become so ingrained that they struggle making the transition to three-man, so officials newer to three-man game must conduct a thorough pregame to review their keys.

Trail is the Crew Saver

The Trail’s keys are very similar to the two-man game.  In a settled situation, he sets up in the same position: five yards in and five yards up from the corner of the box and like the two-man game he cannot help out on a goal or crease call. Therefore, he must watch both passer and shooter.  The Trail is the “crew saver,” that is, with the Single and the Lead focused on the crease, the Trail MUST focus on the on what no-one else on the crew is in position to see. The Trail when he is in position in a settled situation CANNOT miss these hits.

Lead and Single in the Three Man Game

Unlike the Trail, the Lead and the Single’s responsibilities shift substantially with each in a three man game, with the two often swapping responsibilities during the play. As in the two-man game, the Lead’s primary responsibility is the goal. He should set up on goal line extended and work for the best angle to see the goal line, net and ball. He should stay as close to the crease as possible, moving in and out with the flow of the players and passing lanes. The Single’s primary area of responsibility is  the scrimmage area in front of the goal where he functions as a Lead/Trail hybrid.  The Singles sets up five yards above GLE and move in and out of the play. If the Lead clearly has the goal, the Single can watch passers and shooters. If the Lead is forced to move away from the crease, the Single can assume that responsibility. Because unlike the two-man game, the Lead is expected to cover the end line not only on shots, but on ANY contested play behind the crease knowing that he can give up the goal coverage to the Single. The Lead MUST move to the endline, relinquishing the goal to the Single. In this scenario, even though there are two officials near the crease, neither  is now in a position to watch passers and shooter. The Lead and Single needs to trust that the Trail will watch the shooter.

Transition is where responsibilities in the three-man game often get confused. On clearing plays, the Trail should hang back; watching the goalie and focusing on passers, moving with, if not slightly behind, the ball and work his way up to the substitution box and watching all contested subs before moving into position in the offensive end.  After setting up at the cone and focus on the area along the midline, watching for the initial offsides call.  The Single should wait for the ball to pass him before he moves into position at above GLE.  As he follows the play, the Single functions for all intents and purposes as if he were the Trail official until the Trail is able to move into position. Until that happens, the Single MUST watch the shooter and passers; he IS the “Crew Saver.” However, it is important that the crew communicate as the play develops.  The Trail needs to let his partners know that he has arrived so that the Single can adjust adjust his keys. Once the Trail arrives, the Single should slide down to his spot five yards in and five yards up from GLE.

Lacrosse is a game of speed and skill and includes a varying degree of physical play.  Contact should be an attempt to dislodge the ball or redirect the player.  No player is entitled to do bodily harm to another player. Under Federation rules, a player should be flagged for:

So what are you looking for.

As I have always said: the first question you ask yourself is: am I looking at a safety foul or an advantage/disadvantage foul. If the play is not a safety issue, but instead one of advantage/disadvantage you are likely looking at push from behind or interference (NFHS 6:11 or 6:7).  If the shot or ball has been released, you have a play on.  If the contact occurs with possession, you have a FDSW. If the fouls is a safety issue you are most likely looking at a Slash (Rule 5: 7), Crosscheck (Rule 5: 2), Illegal Body Check (Rule 5: 3) or Unnecessary Roughness ( NFHS  Rule 5:4). As the slash and crosschecks have mostly been covered in training, I will focus on the big hit penalties IBC and UR.

Eyes on the Inmates

If you have a big hit, throw a flag and yell “flag down!”  Remain focused on the players!  Keep your eyes on the inmates; watch for retaliation. Do not turn to signal or relay to your partner.  There was just a big hit.  Someone is not happy, perhaps many people.  Get close to the players and make your presence known. Only when things have settled down and players have moved away from each other can you begin the process of gathering information and assessing a penalty. Slow down.

If you have more than one flag, discuss it quietly away from players and coaches, and only after both teams have moved away from each other. NEVER yell across the field to your partner!  EVER! There is no rush to get the penalty assessed.  It is more important to calm things down.  This is particularly true when a player is hurt.  It is problematic is you assess a one-minute penalty immediately after a big hit and then realize the player needs medical attention and is later carted off the field.  Cold you have gone tw0, three, NR, or ejection? Wait until you and your crew have all the facts.

Get the Facts Straight

So what information do you need?

Check out these video below for a great example of why this mechanic is so important! What would you call in this situation?

Watch as the Lead correctly turns to follow the ball on the shot towards the endline, leaving the Single and Trail to watch the shooter. Both Trail and Single should anticipate this hit as it is telegraphed by the defenseman.

Watch the Lead signal goal, while the Single remains focused on the shooter and drops the flag. Defenseman leads with the stick, crosschecks and extends the check into the head.