A well-officiated lacrosse game is managed by a team of officials, not two or three individuals doing their own thing.  The two things that hold a crew together are solid mechanics and communication.  Whenever possible I try to go over at least the basics.  I am a sheet guy.  I hand out a printed pre-game to my crew that covers everything I want to review. For most lacrosse officials, you arrive at the field, throw your strips on and run out on the field.  You simply do not have time to conduct an extensive pre-game with your crew.  While, in many cases, you do not really have the time to have a full pre-game,  you should not underestimate the value of conducting one. 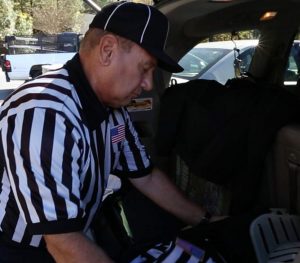 A pre-game should be a well organized, serious discussion led by the Referee. All members of the crew should participate. This is a great time for younger, less experienced officials to really learn how to prepare for and manage a game. The number of contests the officials have worked together should have little bearing on whether or not you hold the pre-game, nor should it be dismissed as the season progresses.  On the contrary, the pre-game needs to be longer and more focused as the games become more meaningful.

I tailor my pre-game depending on the crew I am working with and the game I am about to officiate.  I might go into great detail, highlight or just briefly mention some some of these situations.

But in all cases, I cover my six keys to success:

Not only are you expected to communicate with your partner, but it is essential that the players, coaches, and the spectators understand your call. Eric Evans uses the phrase “Echo and Mimic” and I highly recommend his 2015 USL Convention presentation “Echo, Mimic or Both: Keys to Effective Crew Communication.” Echo key pieces of information: flag down, He’s in, Reset, Get it in/Keep it in or Shot Clock, faceoff violations, tip, game time, and All Even. Mimic key signals: point ready, stop sign, direction, GIKI or shot clock, player has gained the attack box. Be sure that everyone knows what is happening and what to expect.

Talk to Coaches; assistant coaches, get-back coaches, head coaches, box coaches.  I don’t care who they are, as long as they ask politely (note: this doesn’t mean they like or agree with me). Do not ignore them. They want and deserve information. If they feel like you are shutting them out, they may be inclined to try and get your attention in other, less productive ways.  By briefly stopping and passing along whatever information you can, you can diffuse some of the tension that builds up on the sidelines and hopefully avoid making the situation worse later on in the game. They may not like the information that you are giving them, but they will appreciate the fact that you are communicating with them. I tell coaches before the game that we might not get them an answer to their question immediately, but we will get them an answer.

Communication is particularly important when reporting penalties.  Coaches have only a few seconds to decide what personnel they will pt into the game and you want to be sure the table understands.  As the Trail relaying a penalty, be sure to do it right! Remember, you are speaking for the entire crew.

Be sure to certify the table. NEVER assume they know what they job or role is.  I always end my spiel with “we are not going anywhere until it is clear, you understand what we called.”

Talk to the players and let them know what your expectations are and then hold them accountable. If possible, let the player know you did not like what you saw and that it was nearing your threshold for a foul. You may not have to throw a flag at all as they players will back down, ease up. If you do flag them, they (and their coaches) know why you did. Talk to players during dead balls.  Let them know what you don’t want them to do, but also that appreciate what the did do.  “Hey 54, thanks for easing up on that hit.”

After a penalty, be sure to slow down. As the Lead, find the ball and set the field.  Be sure you communicate to the players on the field, particularly the goalie, where the ball will restart and how long the penalty will last. What time is the foul released?  Count players, look for your partner.  Never restart if you are not sure that the you have the correct numbers on the field.

Other situations to be mindful of taking your time are transition/out of bounds. Be sure to work together on deep restarts. Make sure no one goes through a stop sign on restarts.  Hold your direction signal on out of bounds plays as your partner is probably off ball and not watching you.  Are you sure you pointed the correct way and called out the correct color?  If not, STOP and get it right. If there is anything wonky, take the time to make sure everyone knows what is happening. By slowing down and getting it right, you will actually speed up your games by not compounding any mistakes, if not avoiding them all together.

Eyes on the Inmates

The most important thing that we do as officials is watch the action.  For the most part, we are exceptionally focused when the ball is live, but we often shift our focus away from the players once the ball is dead.  We see a foul committed and we move on to what we “need” to do next.  I “need” to throw my flag, blow the whistle, signal a foul, and find the ball.  In fact, you do not need to do any of those things.  When the ball is dead, we become alive.  What you need to do is watch the players. Make sure that there is no retaliation, no trash talking or other BS that happens after a foul or a goal. Stay focused after time outs and watch the players cross in front of the box; always keep an eye on “mixed colors.”

Some situations can escalate more quickly than others. If there is a takeaway check, a hard body check, a late hit or a hard push from behind, you need to watch for the retaliation. A hard ride on a goalie demands your attention.  In these cases, a player who has not given you any trouble, might foul out of frustration.  This is especially important following a score.  This is a situation that has the potential to get ugly.  Run to the crease and focus on the defenders.  If anyone is going to do lash out it’s one of those guys.  Watch the guy who scored; is he taunting? What about the the guy who got beat; is he losing his cool?Keep your focus on the players until you are sure that a situation will not escalate.  No one is awaiting your stoic signal, instead, keep eyes on the inmates. Once players have moved on, you can go about the business of administering the foul or the faceoff and restarting the game.

Set Tone Early, Reassess Often. Be Consistent as a Crew.

You often hear officials say in their pre-game, “let’s make the first flag a good one.”  What they mean is, in order for us to be consistent as a crew, we need to recognize what our partners are calling and match those expectations. The first flag sets the bar that the crew must then meet. The only way to do this is to talk with each other during dead balls.  Be sure to relay important information you have: did you warn a coach or player, are you seeing something off ball that concerns you, what is happening on the faceoff.  The other big piece you need to communicate is what you DID NOT call. If you passed on a push or a hold, be sure to let your partners know.  You also need to reassess how the game is going, is this game turning into a blowout, are the teams getting chippy, is one sideline fired up?  This information will help your crew anticipate what is coming and how to handle it.

There is an old lacrosse officials saying, “it is fast game, not a rushed game.” When you  hustle, you show all that you are focused and engaged.  When you are not, people assume you are uninterested, lazy, confused or out of shape. remember, hustling does not always mean running.  It means moving with purpose.  Get to where you need to be, know what needs to be done next, be ready, and be focused!

Hustling keeps the game moving.  A pet peeve of mine is dawdling on face offs.  Both officials need to the get to their spots.  Wing starts the timer; both officials write the score down and we get the face off started. Similarly, on penalties, the Lead should have the field ready for play as as soon as the Trail has finished reporting the penalty. You should never not know where the ball is on a man up restart!

This is the most important thing to keep in mind. Parents, coaches, players, might yell and scream at you, but don’t take it personally. It comes with the territory.  Most, if not all, will be forgotten.  Keep your head

If you focus on these six keys to success in your pre-game conference, you will work better as a crew and manage your games more effectively and have more fun.

Feel free to download a copy of the pre-game sheets I use and check out the other resources available on the GLOA Resources page I use. These are word docs so feel free to adapt to your style.