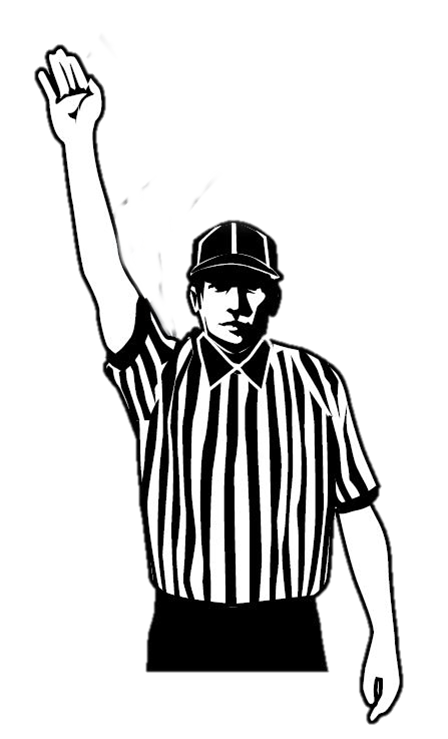 The play on has always been a tricky technique for new officials to master. Typically, rookies are encouraged to just kill the play and assess the penalty.  If they do try and allow for a play on, they are instructed to simply wait and see if the player who has been offended gains possession. Most are warned, “don’t let a play on go on for too long or bad things will happen.” But few people understand the rationale behind the rule and what those bad things might be.

This post is an attempt to explain the reasons behind and the proper application of the play on.

Why the Play on

Prior to the introduction of the play on, a loose ball foul necessitated an immediate whistle, stopping play, so that the ball could be awarded to the offended team. However, players, coaches and officials recognized there was a need to recognize a foul had occurred, but that it did not make sense to stop play if the offended team was going to regain possession quickly. This was especially true in situations when the offended team was not only likely to regain possession, but was going to have a potential scoring opportunity. They gain nothing by you awarding them possession, as they already have it, and the stoppage in play allows team B time to reset their defense. In 1989 the play on technique was adapted from soccer to give officials the option to delay the whistle on loose ball technical fouls in which it was likely that the offended team would regain possession. 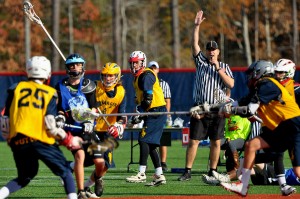 Once the official sees a player be disadvantaged, he raises his hand and indicates to everyone that he has seen a loose ball foul and that he is waiting to see how things develop. If the offended player does gain possession of the ball, the official points in the direction of play and announce the team color (e.g. “Blue ball!”) and play continues. The clock is not unnecessarily stopped and the flow of the game is not interrupted. It is still imperative that an official signal the play-on even if it is obvious that the offended team is going to gain possession of the ball as the official has let everyone know that they saw the foul.

Killing a Play On: Fast Break of Free Restart

How long you wait before blowing the whistle and killing a play-on is a key aspect of game management. Typically, a play-on is very short: 0–2 seconds. If the offended team does not quickly gain possession, the whistle should be blown and a free restart awarded to the offended team. If the ball pops out of the scrimmage area and it seems likely that a player from the fouled team will be able to track down the ball and scoop it uncontested, you can allow the play-on to continue for a bit longer. Make sure you say to yourself what team is getting the ball. 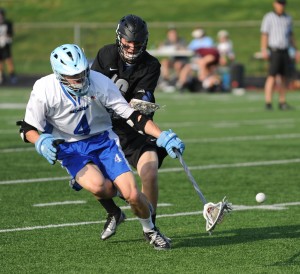 However, it is important to note that the offended player simply gaining possession is not a good enough reason to end the play on. The play on ends when the team fouled regains possession of the ball and their advantage. If player A1 is pushed from behind by B3 when the ball is loose and then A1 regain possession of the ball only to be immediately checked by B3, has A1 really regained his advantage? Aren’t we rewarding B3 for an illegal loose ball push? Yes, you gave A1 the opportunity to regain possession, but did he ever really recover from being disadvantaged? The fundamental question an official must ask themselves in a play on situation is what would the offended player rather have an opportunity to continue play or a free restart. If they would rather have a free restart, kill the play. The loose ball push is a common scenario, and whether a team regains its advantage are key factors but there are others.

Other factors will affect how you deal with the play on. The score and the time remaining in the period are both important factors to consider. If, for example, the game is tied, the clock is winding down and A1 has a chance to go to the goal and even up the score after a loose ball push, by all means give it to them. But if the advantage is quickly lost, blow the whistle, award the ball and restart play. That same play in the middle of the first quarter, kill it and award the ball. 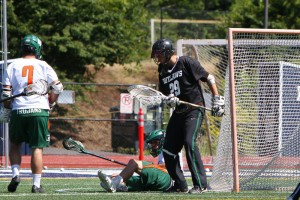 Where the play occurs will also factor into how you assess a play on. A North-South play on is better than an East-West play on, and one in the attack half of the field is better than one in the defensive half of the field. Location will also affect how long you let a play on go. If a loose-ball technical foul occurs just as a player is moving towards a nearby boundary-line, the crease, or a potential off-side situation, you may avoid the play on altogether. If a loose ball foul is committed in a scrum, it is highly unlikely that a player will regain both the ball and his advantage. Kill it quickly, get the ball up in a players stick and restart play. Scrums lead to rough play; pushes lead to body checks and slashes. At the lower levels of play, you may also want to let players know what they did wrong. Avoiding the play on all together allows you to do that. “Number 35, you can’t push him in the back.”

There are also particular situations that you should be aware of that regularly are dealt with as play ons.

Player A2 is chasing a loose ball last tipped by the defense rolling towards the midline (not an over and back situation). B4 steps on the midline causing him to go offsides. This play is very similar to the loose ball push scenario we have already discussed. Make sure the offended team regains both the ball and their advantage. Do not reward B for being offsides.

Delayed Substitution: The Silent Play on 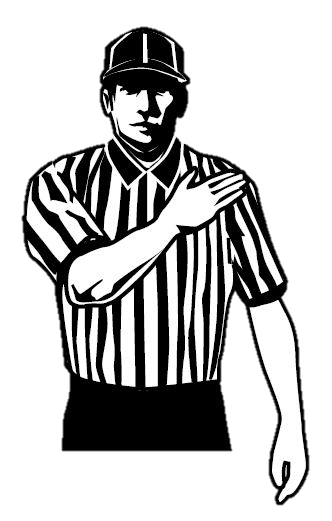 This type of play on is often referred to as a “silent play on.” In this case, the official does not actually see a loose ball foul, but has become aware of the potential for a violation. B1 subs off and B12 does not immediately entered the field. Has Team B committed a technical foul? Not quite. Yes, a player must immediately enter the field of play, but no advantage has been gained. If B12 enters the field and A5 is there to pick him up, the play on is over. If B12 runs onto the field and there is no fast break, the play on is over. If B12 waits and streaks onto the field and the ball is passed to him and he then runs unguarded towards the goal: whistle, because Team A was disadvantaged; award ball to Team A.

Get it in, Keep it in 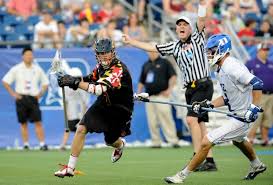 Once a GII/KII has been given to Team A for either stalling or being ahead in the last two minutes of the game, they must keep the ball in the attack box. Once the ball is out of the box, unless it is tipped or the result of a shot, the ball should be awarded to Team B. If the ball leaves the attack box you need to ask yourself if Team B wants a chance to grab the ball and take off on a fast break or to stop the clock and have a free restart. These are judgment calls. In either case, until Team B has clearly regained their advantage, the play on is still in effect. 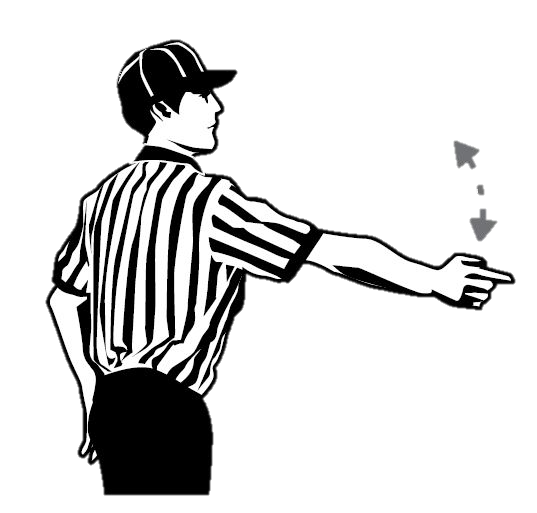 With the introduction of the over and back rule, these are situations are more and more common and officials must make quick calls about how long to let a play on go on for. Once Team A has gained the attack box and ended the initial 10-second count, they may not allow the ball to cross midfield unless the ball is last touched by Team B or is the result of a shot. This scenario is very similar to the GIKI scenario we just addressed. If the ball crosses and Team B’s attackman gains possession but is immediately checked by Team A defender, has he truly regained his advantage? The Trail official must determine whether Team B would rather take the ball and the five yards or have a chance to make a play.

Do note that in order to call an over and back, Team B can not be the last team to touch the ball, therefore if a Team B attackman leans over the midline and plays the ball, there can be no over and back call. On the other hand, if the ball is an errant pass and is heading to the back corner of the field and players are in a footrace to see who gets the ball, you may hold off on killing the play on. Again, your hand up indicates you have a call and you are going to see how this plays out, but Team B is going to end up with the ball. Score, time remaining in the period and location of the ball now come into play in making this call. 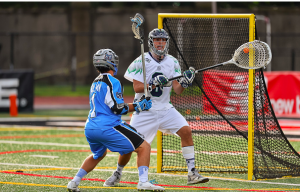 Goalie Interference is unique in that it is the ONLY situation in which a loose ball as well as one in possession results in a play on. Interference with the goalie when the ball is loose results in the ball being awarded to the defense. Like other play ons, it ends when offended team gains possession and their advantage. If the goalie has possession, is in the crease, and is interfered with, the play on is used instead of a FDSW. The play on ends in this scenario if the goalie steps out of the crease, the four second count ends, or the goalie completes an outlet pass to a teammate. If the count ends or the pass is incomplete the defense is awarded, not only the ball, but a free clear.

Officials are told “don’t let a play on go on for too long or bad things will happen!” So what bad things. For starters, if you let a play on go on for too long you might forget which team committed the initial foul. The other two issues are simultaneous fouls and goal not counted. As I have already mentioned, a loose ball and a mob of players battling for it rarely leads to something good. As officials we want to get the ball up off the ground and into to someone’s crosse. In scrums, the level of physical play tends to increase the longer the ball is on the ground. Pushes lead to slashes which lead to simultaneous fouls (see the article by Harold Buck). Are you truly prepared to explain to a coach why someone is going to serve penalty time for a loose-ball push? Play around the crease can also pose a problem. A play on for goalie interference might give Team A an unintended opportunity to score. You now need to wave off a goal and award the ball to the defense. Again, what would Team B rather have: the ball and five yards or a loose ball around the goal.

So, ask yourself, what would the offended player rather have: an opportunity to continue play or a free restart. And keep the play on short!

Special thanks to Harold Buck and Jim Carboneau for their assistance in drafting this post.