When I’m not out on the lacrosse field, I work in the cybersecurity field.  My profession is one that can be very technical at times.  Much of my day is spent in detailed conversations on complex security and technology-related topics.  Many years ago, I learned that it very important not only to explain the “what”, but also to explain the “why.”  When people understand the why, they are able to apply the principle of the thing you’re asking them to do.  As a cybersecurity professional, I can tell you, “You must have a strong password that is unique for every website.”  But if I also explain why (If a hacker steals your password from one website, he can’t also use it to break into your bank account), it resonates with my audience.

This same principle applies to lacrosse officiating.  There are many rules and officiating mechanics that we train to do, but sometimes officials may not understand the why behind these rules or mechanics.  Let’s take a look at a few examples.

Referee and Umpire, Bench-side and Far-side

In a game with two officials during the first half, the Referee is on the far side and the Umpire is on the bench.  In the second half, we switch.  Why do we do this?  Why don’t we switch at the quarter (as the teams do)?  Why don’t we stay on the same side of the field the entire game?  Here’s the why.

First, the Referee is typically, but not always, the more experienced official.  So having him on bench-side later in the game is done because this is typically when a game may be more intense, or there is a greater likelihood of coaches expressing concerns.  This puts the more experienced official in a better position to deal with coaches in a heated contest.  And it also allows the Umpire to avoid having to deal with coaches and focus on the game.  Having the Umpire on bench-side during the first half also allows the coaches to interact with both members of the crew.  That being said, there may be situations where the crew may decide that the Umpire should stay far-side the entire game.

Second, this allows each official to cover a different team’s goal each quarter.  If we switched sides of the field every quarter, we would cover the same team’s goal every quarter.  By switching at the half, it allows us to see a different team on offense each quarter.  This helps avoid any appearance of bias, balances differences between officials (such as speed of a four-second count), and in a blow-out game keeps one official from doing all the faceoffs. 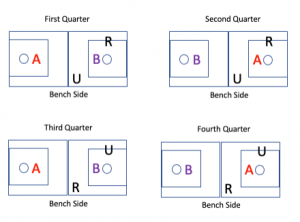 What about tournaments, middle school, or other games where we’re doing two halves instead of four quarters?  In that case, it is the crew would not switch sides of the field at the half. The teams switch goals they are defending/attacking, and this allows both officials to see a different team attacking a different goal.  In these situations, it also makes sense for the more senior official to stay bench-side the entire game.

We know that on a faceoff, we call “Possession” (and wind our arm) when one team gains possession of the ball.  But if the ball crosses the restraining line without being in possession, we call “Play” and hold our hand up (similar to a “play-on” signal).  Why do we do this?

The first reason is fairly obvious:  there isn’t possession, so we can’t call possession.   That being said, the “Play” and “Possession” signals actually serve several purposes.

Play/Possession releases expired penalties.  The end of the faceoff also released any players in the penalty box whose time has expired, but who are not allowed to enter the field of play until the faceoff is over.  The reason for this rule is so that a team cannot gain an advantage if the midfielders are still fighting for a loose ball.  This is also a safety issue.  If a player is playing a loose ball at or near the penalty box, a player whose penalty time has expired cannot immediately enter the field and unexpectedly engage the player attempting to scoop the ball.

Reface vs. AP.  There is a rather obscure rule, Rule 4, Section 3, Article 2 which says:

The last reason is a college mechanic:  Possession starts the 80-second shot clock, but Play does not.

I hope this article gives GLOA officials some things to think about regarding the why behind certain mechanics or rules.  If you have questions or ideas for other mechanics or rules you’d like discussed, let me know!