The long and the short of it: All old NFHS sticks are legal for play in high school and it is now legal to play with NCAA heads. 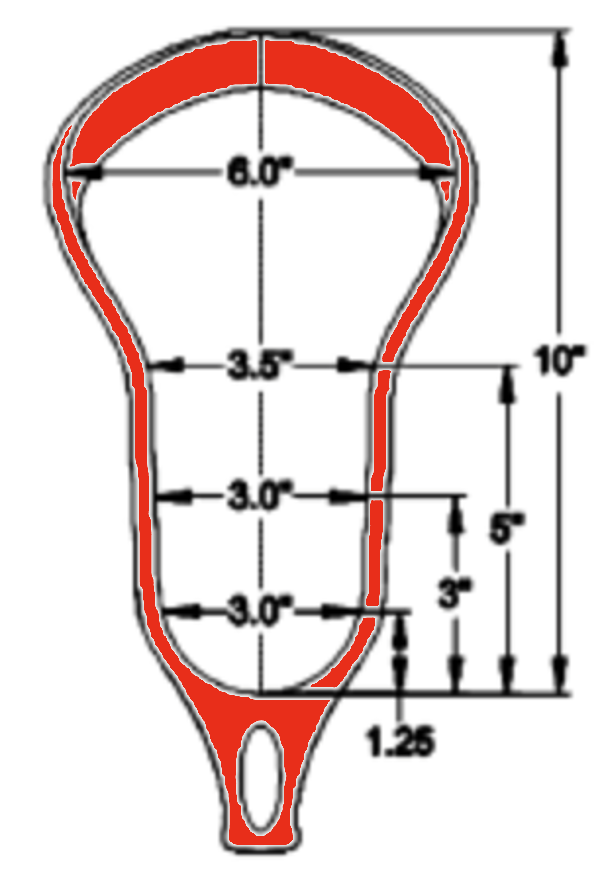 Legal for both NCAA and NFHS Play.

Rule 1:6 and 1:7 as these spell out what the legal dimensions and construction of a lacrosse stick are.

The head at the widest point may between be 6.0 inches–10 inches wide, A goalkeepers crosse may be between 10 and 12 inches. The sidewall may not be more than 2 inches high.

The length of a short stick is between 40–42 inches. A  long pole is between 52–72 inches. The measurement is from the tip of the head to the bottom of the butt end.

The circumference of handle may not exceed 3.5 inches and shaft may not be cambered or bent. 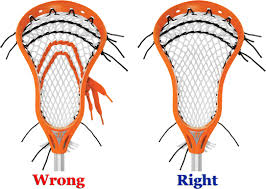 All hollow shafts must have a end cap specifically manufactured for lacrosse; tape, bottle caps etc… are not acceptable. This is a get off and fix penalty.

Hanging strings may not be longer than 2 inches. This is a get off an fix penalty.

No shooting strings may be lower than 4 inches from the top of the crosse. This is a 3 minute NR penalty and the stick is out of the game. 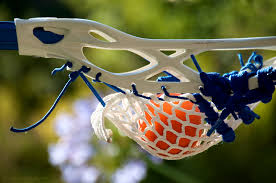 The pocket of a non-goalkeeper crosse may not be deep enough for the top of the ball to be visible below the sidewall. This is a 1 minute NR penalty and the stick may return to the game.

The pocket may not have a hole, lip or hook in its mesh designed to ensnare. This is a 3 minute NR penalty and the stick may not return to the game.

Under NFHS rules, officials are expected to perform at least two random equipment checks on each team.  The goal of these checks is to ensure that players are properly and safely equipped and that the sticks do not give any one player an undue advantage.

Illegal stick penalties are game changing fouls.  By rule they are non-releasable and, as they are non-releasable personal fouls, count towards a player being disqualified or ejected.  Typically officials conduct one random check per team in the first half and one per team in the second half. Most checks occur during dead ball situations: usually during a team time-out, between quarters or immediately following a goal. A check requested by a coach is conducted during an official’s time-out.

Random equipment checks may be conducted during a flag-down situation or when a player is serving a time serving foul, but many officials often opt against doing so. Most crews attempt to complete all required checks before fourth period.

Under no circumstances are officials allowed to conduct a check after the game has ended. So, a coach cannot request a check on the shooter who scored the game winning goal after time has expired or overtime.

As a courtesy, officials will check sticks prior to the beginning of the game.   Officials will usually stand on the far side of the field at the midline once the field has been inspected and the coin toss conducted. Sticks that are found to be illegal are not penalized as they game has not yet begun.

Note that sticks that are found to be legal before the contest begins are not immune from being checked during the game as they may become illegal during play.   This is what officials mean when they tell players: “This stick is legal now.” If officials find a stick to be illegal explain they will explain the issue so that the player may correct the problem before the game begins.  If it is border line, they will say “This is close or tight.”

No courtesy check can be conducted once the game has begin including during halftime between quarters.  Any illegal stick must be flagged at that point!

In addition to these random checks, a head coach may request an equipment check on a specific player at any time during the game (but not after the game has ended). Each coach is allowed one free check per game. If the player’s equipment or crosse is illegal, the coach keeps his free check. However, if the equipment or crosse is found to be legal, the coach loses his free check. He may still request another check, but if everything is legal, his team is charged a timeout or is assessed a technical foul if no timeouts remain. (See NFHS Rule 4:27) Think of this as being similar to an NFL Coach’s Challenge Flag: win your challenge and your may challenge again. Lose and you are out of challenges.

A coach who requests a non-free check and the stick is found to be legal is assessed a time out. If the team does not have a time out they will be assessed a technical foul.

Many players, coaches and fans will argue that coaches challenges are unworthy of the game and point out that they are often requested by the losing team.  As officials, we simply follow the rules.  It is true that games have been decided by these fouls.  It is in the best interest of players to make sure their crosses are legal.

Any GLOA official would be happy to instruct a coach or a player on how to measure their own crosse so that they can be sure a stick is legal.

In a two man game, the each official selects a player and insects all of equipment and crosse. In a three man crew, the single side official is responsible for locating the ball while the bench side officials each inspect a player’s equipment and their crosse, usually choosing a player from the team whose bench they are standing in front of.

Any stick, including one not on the field may be checked and while not recommended unless a coach requests a check.  Please note that a player may be checked multiple times during the game. It is not necessary to keep track of the numbers of the players inspected.

An official should identify the player by his number and ask for his crosse. “Blue 34, please hand me your stick!” Ask that players not throw their crosse at you.   Officials are watching to see if players adjust their crosse prior to the request!

In addition to determining whether or not a stick is legal, officials need to check that players are wearing all of the required equipment (see Rule 1:9): 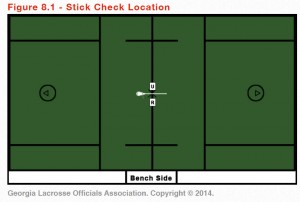 Stick checks are conducted away from the players and the bench area at midfield, unless checking sticks following a goal.  The Referee should face away from the bench and perform the measurements.

The Umpire (and Field Judge in a three-man game) should face the bench area holding the crosses while simultaneously keeping eye on the players.

There are a three tests that are performed on a crosse:

An equipment check and stick check should take no more than 30 seconds to complete.

Use ball to test pocket depth.  If you can see the entire ball below the lowest part of the plastic sidewall the stick is illegal. Check to see if there is a ball stop.  A ball stop is not required, but no more than one balls top may be used. The pocket may not have a lip or hook in it which ensnares the ball.  (See Rule 1:6-7) 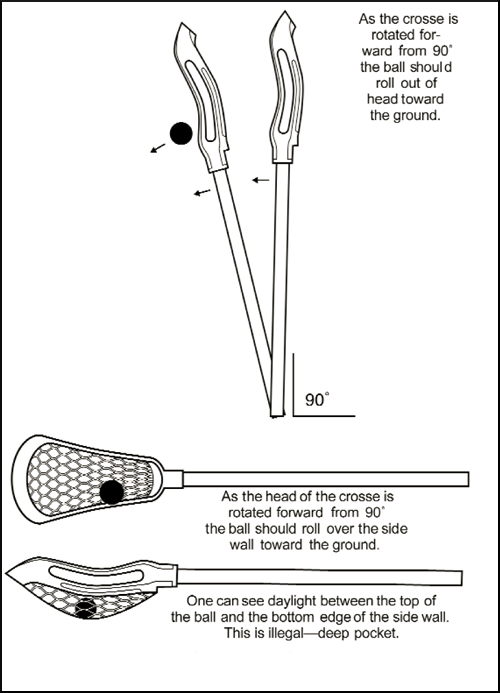 Measure the full length of the crosse from top of the head to the butt end.

Measure the width inside edge of the head from the widest point.

This may be done using an NCAA score card or a tape measure.

Measure the length of the head from the tip of the plastic to the stop.

DO NOT measure the back of the head.

Get off and Fix Violations 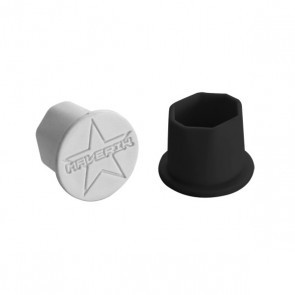 There are a few equipment and crosse violations that are not penalized immediately. These are known as “Get off and fix” violations, and are taken care of by warning the player or the player’s coach about the violation and giving the player the opportunity to fix the violation, put on legal equipment, or switch out crosses.

Illegal stick penalties are of three varieties: Adjusted Prior to or During Request for Inspection, Deep Pocket and Altered Stick.

Adjusted Prior: 1 minute NR in addition

A player who adjusts the strings of his crosse or widens the head after the official has requested the crosse is flagged with a one minute non-releasable unsportsmanlike conduct penalty and the check continues.  This penalty is added to any additional penalties assessed after the check is complete (Rule 5:5 Situation D).

Sticks found to have deep pocket 1 minute NR penalties.  In these cases the stick may be fixed and return to game. THis is the ONLY stick penalty that may return to the game.

Adjusted: 3 minute NR out of game

Altered crosses are 3 minute NR penalties and the stick is placed on the table for the remainder of the game.

If a player scores a goal and then is found to have a violation that specifically disallows a goal  before the next live ball, the goal is taken off the score board.

Any goal scored by the player prior to the violation being discovered stands. A goal scored by another player stands, even if they were involved in the play (e.g. the player who had the assist). Other illegal equipment does not disallow the goal. 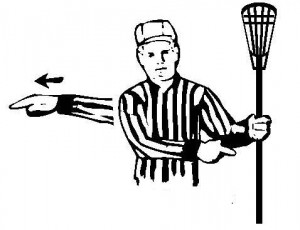 As these checks are done during dead balls, coaches and players will often be in their huddles and unaware of what is going on with the equipment checks.  The Referee will try and get the attention of all parties, throw the flag and report the penalty while the Umpire sets the field.

An official should explain what was illegal about the crosse.  “Coach, it was too short.” “It is pinched.” “Coach the ball would not roll out.” But under no circumstances is an official to demonstrate what was illegal about the stick. Nor may a player or coach inspect the crosse until they are allowed to do so (1 minute for a deep pocket or the end of the game for an altered stick).

Illegal Crosses on Both Team

If both crosses are found to be illegal during a check, officials should treat as administer as simultaneous fouls in which sequence cannot be determined.  Therefore for penalties of the same length, award ball with Alternate Possession.  If the fouls are of different lengths, the team with the least amount of penalty time starts with possession (i.e. one minute NR vs three minute NR)