The NFHS Boys Lacrosse Rules Committee has released rules changes for the 2023 season that address three major areas: – field markings, equipment requirements and officiating. A total of nine rules changes were approved by the Board of Directors following the committee’s annual rules meeting held July 16-18 in Indianapolis. Note text that has been struck has been removed from the rulebook.

According to the most recent NFHS High School Athletics Participation Survey, 113,702 boys participate in lacrosse in 3,026 high schools across the country.

Each year the NFHS rules committee lays out a number of issues that officials, coaches, and players are expected to focus on during the upcoming season.  This year the committee has selected five areas: Sportsmanship and Conduct,Player Safety, Eyeshade, Faceoffs, and Running Clock Penalties.

The rules committee advocates for continued commitment by all participants – players, fans, spectators and others – to respect the game and each other.  This respect and decorum should be demonstrated on the field and off the field at all times.  Participants are asked to monitor and maintain sportsmanship while encouraging both teams involved in the contest.  Participants are reminded that comments directed towards coaches, players and officials are expected to be positive in nature. Note – updated wording to include players.

The rules committee has aligned with other sports to standardize the use of eyeshade. Eyeshade (grease or non-glare strips or stickers) shall be a solid stroke and may not include words, numbers, logos or other symbols.

Upon the whistle starting play, each player must attempt to play the ball first.

Under a running clock when a penalty expires during a faceoff period, the player may not reenter the game until the faceoff is completed.

Rationale: The endline and sidelines are critical parts of the game administration.  Failure to have these continuous lines will result in an illegal procedure penalty.  Logos running through the endzone of many football fields are often placed on the endline for lacrosse. The endline for lacrosse is just as important as the midline. The penalty for not having a solid endline or sideline should also be illegal procedure against the home team if the situation cannot be fixed prior to the start of the game.

NOTE: A GHSA Incident Report MUST be submitted by the Referee for ALL FIELDS that are not in compliance. Even if you know previous reports have been submitted.

Rationale: Standardizes the box with other rules codes including NFHS Girls Lacrosse and NCAA Men’s Lacrosse. Increases the amount of control an official has when substitutions are entering and exiting the field.

Note: The substitution box has been reduced from 20 yards wide to 10 yards wide.

Please note that both the field diagrams in the rule book are INCORRECT.

Note: The coaches box has been increased from 15 yards wide to 20 yards wide.

1-7-1: ART. 4… The crosse shall be made of….The pocket/net shall be completely attached to the head and the side walls, having no holes or gaps larger than 1.68 inches in diameter (i.e. an American golf ball).

Rationale: There has been an increased use of a stringing technique which allows for trapping the ball in such a manner where the stick will pass a stick check, but when force is applied stretches the mesh net to entrap the ball.

1-8: . . No player shall use a crosse that does not meet the specifications of Sections 6 and 7. The crosse shall not have protrusions or sharp edges. … 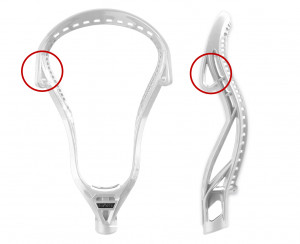 Rationale: Recent innovations by stick manufacturers could hook or catch on a player’s helmet or facemask, thereby potentially causing injury. In order to maintain safety and fair play, sticks with protrusions and sharp edges are not permitted.

Note: The Gait D Head has protrusions coming out of each side of the top of the head which are designed to ensnare an opponent’s crosse, therefore it is ILLEGAL.

1-9-1g: ART. 1g…Shoes shall be made of a material which covers the foot (canvas, leather or synthetic) attached to a firm sole of leather, rubber or composition material which may have cleats or which may be cleatless. Among the items which do not meet these requirements are gymnastics slippers, tennis shoes cut so protection is reduced, ski and logger boots and other apparel not intended for lacrosse use:

1) Removable cleats shall conform to the following specifications:

(a) Constructed of a material which does not chip or develop a cutting edge. Legal material includes leather, nylon, certain plastics and rubber. Cleats may be tipped with low carbon steel of 1006 material, case-hardened to .005-.008 depth and drawn to Rockwell hardness of approximately C55; the use of aluminum or ceramics is not permissible.

(c) An effective locking device which prevents the exposure of metal posts shall be incorporated.

2) Non-removable cleats are limited to studs or projections which do not exceed ½ inch in length and which are made with nonabrasive rubber or rubber-type synthetic material which does not have and will not develop a cutting edge.

g. Shoes shall be worn which are designed for the sport of lacrosse. Metal spikes are not permitted.

Rationale: Modern design has standardized the shoe used for outdoor field sports and this section is no longer needed in the detail currently in use and the text has been removed.

Note: This is an area that we have not been attentive to as it has never really been an issue.

4-3-1: ART. 1 . . . Play shall be started at the beginning of each period and after each goal by facing the ball at the Center.

Rationale: Restarting the game has been unclear due to the way the rule was written. This rewrite simplifies the rule direction and places clarifications back in the situations.

Note: This is not a change, but rather a codification in the rules of what we have already been doing.

4-3-1. . . When one team has three players in the penalty box, and the other team commits a violation, the team will receive possession on the defensive side of the field.

Note: This rule addresses a situation in which a team with three players in the penalty box is awarded the ball when a faceoff is pending, normally we would have the team take the ball one step over the midline in their offensive end. However, they cannot be on their offensive side of the field or they will be offsides. This allows a team to begin play on the defensive end.

4-24-1: ART. 3. . . An official may suspend play at their discretion. If a player loses any of their mandatory personal equipment in a scrimmage area or a player is apparently injured, play shall be suspended immediately. A goalkeeper, when outside the crease, is treated like a field player.

Other Rules Affected 4-24-8: ART. 8. . . Play shall be suspended immediately if the goalkeeper’s stick or any other mandatory goalkeeper’s equipment becomes broken in the crease.

Rationale: The current rules did not define what happens when a goalkeeper is injured when away from his crease and outside the scrimmage area. When the goalie is outside the crease, the goalie is treated like a field player if injured.

6-10-2: ART. 2 . . .The stall warning remains in effect until a goal is scored; a shot is taken above the goal-line extended hits the goal pipes, goalkeeper, or his equipment; the defensive team gains possession of the ball; or the period ends resulting in a faceoff. After the team has been warned, stalling shall be called if the ball leaves the goal area in any manner other than as a result of a shot on goal or a touch by the defending team.

Rationale: This is what we have done. Clarification on when stalling shall be called; stalling should not be called on a team because a shot that leaves the goal area was not “on goal.”

7-2h (NEW): h . . . During running time, penalty time will start with the whistle resuming play after the penalty is administered. If there is time remaining on a non-releasable penalty when a goal is scored, the earliest the penalty will release is when the ensuing faceoff has been completed.

Rationale: This clarifies what we have always done.  A player serving a penalty may not enter the field of play until the faceoff has ended even if his penalty time has ended.