Faceoff are one of the most important parts of the game today. With a few exceptions, every period begins with a face off. Teams that win more faceoffs typically have the ball on offense longer and therefore generate more scoring opportunities which usually leads to wins.  You must be proficient in your face off mechanics, have good positioning, and communicate well in order to execute a fair faceoff. And while face offs are a difficult part of a game, they are one of the few times in a game where we know exactly what the players are going to do.

There are three major concepts to understand regarding face offs.

Here is a guide for conducting a good faceoff and be sure to watch the video at the end of the post.

While you are waiting on your partner to signal that the field is set, it is perfectly acceptable and encouraged to talk with both face off players about your expectations for a clean face. This lets you build a rapport with two players that you will likely see on future face offs. 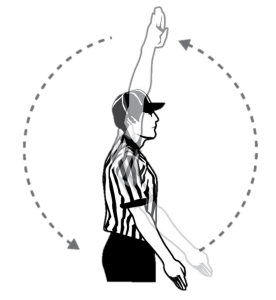 Once wing players have passed you, keep floating back towards your sideline and goal. If a player gains clear possession of the ball then wind arm backwards and loudly state: “Possession!” Make sure that the player has possession: defined as carrying, cradling, passing or shooting. If you jump the gun on this you release the other players early you then have 12 players fighting for the ball instead of a more manageable 6.

If the ball crosses the defensive restraining line (DRL) before possession is gained then wind wind arm backwards and loudly shout: “Play!” which releases the players and ends the faceoff. It doesn;t need to cross into the box, only the DRL!

In a three man game, the faceoff official has a helper and it works best if these two work together. As we have noted there is a lot to look at.  One official can only see some of these things; but with two officials we can divide and conquer!  In your pre-game conference you can clarify what the Face Off official (FO) and Lead Left (LL aka the Helper ) will be responsible for. Things to note:

When helper is good with the set up, back out a few feet and sets himself. Get yourself into a stationary position quickly about 5-7 yards away from the FOGOs. You must be close enough to the players to see any pre- or post-whistle violations, yet far away enough to not interfere with them once you blow the whistle.  Go to a spot you where you are comfortable getting to your goal in the event of a fast break. Remain motionless until the whistle blows. If there is a girls faceoff circle on the field you CANNOT be outside of the circle!

As the LL backs out the FO steps in with the ball and places the ball and administers the faceoff. The helper is watching for the initial contact by the players and for holding.  Be sure to watch head contact!  The FO is watching the heads of the crosses as he backs out.

Face Off Rotation by Quarter:

The Referee takes the first face off, the Umpire is the helper and the Field Judge the wing.  The crew then rotates responsibilities each period that begins with a faceoff with the FO official moving to the wing, helper to the FO and wing to helper.

When the FO is ready to administer the faceoff, quietly announce “Timer’s on!” and pump fist when the Face Off Official raises ball into the air and flip on 20-second timer. If it seems a team needs a little encouragement you can be a little louder; this will get the players to move into position faster.

Note, the official only needs to be in near the center x and have the ball.  The quicker you get things going the faster the game will go! Hold your hand up UNTIL the field is set.

Once the field is set give the “Ready” signal (point towards the goal the you will cover as lead). Always points towards the goal you plan to cover as the lead official. When pointing towards your goal, do not point across your body. Use the arm that is closest to the goal. It is also much clearer to the Face Off Official than pointing across your body or pointing directly at the Face Off Official.

If a team is still substituting and is clearly not ready when your 20-second timer buzzes then signal Delay of Game and award possession to the offended team, but don’t be too good.

If you feel the timer is about to expire and one player is running hard to their position, but will probably not make it in time you may turn your timer off. However, if you have already warned a team, you may opt to enforce the delay.

Reward hustle if the call will be borderline for the restart, as there is very little advantage or disadvantage towards either team.

Get to your Spot

Once the face off begins, float to your respective keys:  if you are the helper or the wing official, get to the restraining line to see if anyone releases early! Get to your goal if possession is gained and the players move into the box.  If you are the Single or Trail official, get into your position and begin to work a settled situation.