As an official, responding to coaches during a game is one specific aspect of overall communication with coaches. Yes, there are rules and procedures in place in the rulebook, but responding to a coach is often more art than science, more dealing with human behavior under stress than applying lacrosse knowledge.

In general, officials need to recognize that coaches have invested much time and effort in preparing for a game and that an athletic contest can generate strong emotions. Officials will best serve the game that afternoon by defusing, managing and helping a coach through a tough moment rather than by assuming an immediate adversarial role. Officials must strive to be engaged at all times: aloofness, indifference, boredom, and disdain are inexcusable.

Most often when a coach addresses a referee he is either seeking information or is simply venting. We always need to answer questions, but we don’t always need to address venting. At some point, though, “Coach, it is my job to inform you, not convince you.” But the referee who can do both simultaneously will be well served.

What are the strong aspects of your personality that you can bring to the situation? A good rule of thumb is to never touch a coach, however well-meaning the touch may be (hand on a shoulder or forearm, etc.) Even if we are treated unprofessionally or rudely, we MUST respond professionally. Yes, there will be times when you will have to “bite your tongue.” Responding to, “that’s a terrible call” with, “that’s a terrible man-up play you just ran, Coach” is unacceptable. Stay calm and kill them with kindness. Penalize calmly, without anger or annoyance. A calm voice in announcing a penalty to the table goes a long way in “turning down the heat.” Humor can work at certain times, but it often backfires.

Question or statement? Questions require answers. Not all statements require a response. If you can’t answer immediately or need to get more info come back later to the coach and have an answer. They will appreciate it. Complaint disguised as a question. “Are you guys going to call ANYTHING today?” “Are you going to let them ward all day long?” “Why is that not a hold?”

Threat. “You will never work here again,” or, “I am calling your assignor after this game.” These warrant a penalty.
Questioning an official’s integrity. “You’ve always screwed us,” or, “Every time you come here…this is what we get!” Penalty warranted.

WHO IS SAYING IT?

Head coach or assistant? “Coach, glad to answer your questions, but assistants need to coach.”

TO WHOM IT IS SAID?

To you nearside? Or partner farside (Yelling across the field so that players, teams, and spectators can hear). “Coach, my partner is my team out here today. Where would we be if we didn’t work as a team?” To spectators, table, or other team? (Inciting?)

HOW IT IS SAID.

HOW MANY TIMES IT IS SAID

WHERE IT IS SAID

WHEN IT IS SAID

POSSIBLE RESPONSES FROM THE OFFICIAL (a hierarchy or ladder) 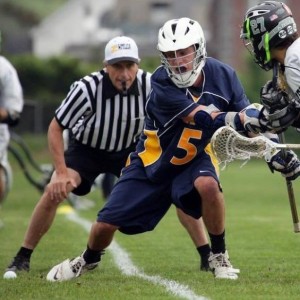 Evans earned First Team All-New England as a defenseman for Hotchkiss in 1968, but it was not until the 1990s that he started officiating. He is one of a handful of referees who have worked a NCAA Division 1 Final and a World Games Final. During a 9-year career officiating in Major League Lacrosse, Evans served as Secretary of the Collegiate Officials Committee and Chair of the International Officials Committee for US Lacrosse. He was on the NFHS Rules Committee for four years. A camper in the early days of LAREDO (Vail), he has led many LAREDO camps and is often a presenter at the US Lacrosse Convention. Evans enjoys teaching officiating as much as he does blowing a whistle on the field.