The Over & Back violation, Rule 4-14-3, Article 3, was added in 2016 to the NFHS rule book.  Similar to the back court violation in basketball, the rules states that once the offensive team satisfied the 10-second count by touching the ball into the attack box, it is a violation if the ball returns to the defensive half of the field. The ONLY two exceptions are if the play is a result of a shot or if the defensive team is the last team to touch the ball. Per the NFHS memo the ball MUST touch the center line, the ground on the defense half of the field or anything in defensive half.  The midline is NOT treated as a plane. (See the 2016 Rules Memos)   This must be covered in your pre-game.

In these two examples, the gold defender successfully bats but does not possess the ball back into the offensive end; no over and back.  In the second example, the defender again bats the ball and the white midfielder who picks up the ground ball then carries the ball across the midline; over and back violation.

Exceptions to Over and Back: Shot and Tip 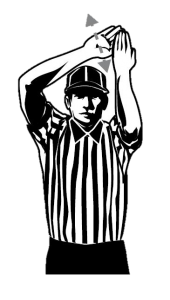 The two exceptions to over and back are if the ball was last touched by the defensive team and a shot.  Remember, it does not say a defenseman or goalie was last to touch, but the defensive team, so if a Team B attackman leans over the midline and plays the ball, Team B was the last to touch the ball and there can be no over and back call. A shot is defined by Rule 4-5-9: A shot is considered a ball propelled toward the goal by an offensive player with the intent of scoring a goal. A shot can only be made when the ball is parallel to or above the goal line extended. Additionally, it can be either thrown from a crosse, kicked, or otherwise physically directed.  And remember, when Team takes a shot and it ricochets off the pipe, goalie, or any other player, it remains a shot until the ball comes to rest, it is possessed by either team, or new impetus is added to it.

These situations require good crew communication and quick and decisive calls. On a shot, your crew should be yelling “shot!” You and your crew also needs to communicate is the defensive team (i.e. Team B)  last touched the ball with the tip call and signal.  Even if it is only the Trail official who sees that the last team to touch the ball before it crossed was the defensive team he should yell and give the “Tip!” signal to let everyone know why a violation was not called.

Play at the Midline

The Trail official MUST get to and straddle the midline! A player from team A in the defensive half of the field may bat the ball with his cross or kick the ball so that the ball does not cross the midline, but may not possess (carrying, cradling, passing, shooting) the ball. once a player on the defensive side of the field possesses the ball, the ball is considered to be on that side of the field. Trail (and Single) must also watch for pushes from behind and offsides! The lead can slide up towards the midline to assist, but still has goal responsibilities. In a three man game, the single side official should quickly move up to the midline to assist in making this call.

If the ball crosses the midline and there are a pile of bodies fighting for it, kill the play and award the ball. Three are a few situations where this may be treated as a play on.  Score, time remaining in the period and location of the ball now come into play in making this call.  In all cases however it is important to keep these plays ons extremely short.  If Team B picks the ball up cleanly and heads to the goal, let the play continue.  These situations are rare. The Trail official must determine whether Team B would rather take the ball and the five yards or have a chance to make a play. If the ball crosses and Team B’s attackman gains possession but is immediately checked by Team A defender, has he truly regained his advantage? (See Understanding the Play On!) If the ball is an errant pass and is heading to the back corner of the field and players are in a footrace to see who gets the ball, you may hold off on killing the play on to see if the play will result in a fast break.

In the event you have a violation, the Trail should give the signal and take off to be the new Lead.  The Single or new Trail should be rushing to the midline to administer the restart.  Don’t be afraid to kill the play if a player takes off prior to the whistle and bring them back.  If the ball has rolled a significant distance from the midline, make sure it is restarted at the midline. This does not disadvantage the defensive team and gives your partner a chance to get to GLE.
In this example, the ball crosses midline and rolls well past the midline. The Lead official gives the signal for over and back and tells the white player to move the ball back to the midline for the restart, meanwhile the Single official makes his ay up to the midline and administers the restart giving his partner time to get to GLE.

Ball Crosses and No Violation

If there is no over and back violation and Team A regains possession in their defense end, you simply begin a new 20-second count. If Team B recovers, begin a new 10-count.